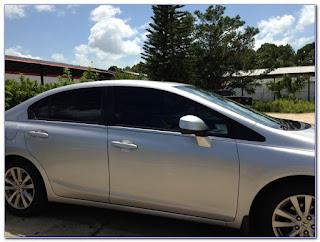 Since 1992, New York State law has required that all windshield and front side windows allow at least 70 percent of outside light to pass through. The new law is designed to better protect law enforcement by keeping vehicles with excessive tinting off the road.

This got a bit harder on January 1, 2017 with the implementation of the brand new window tint law in New York. This law didn't change.

Windshield: Non-reflective tint on the top 6 inches of the windshield is allowed. Front Side Windows: Must allow more than 70% of light in. Back Side Windows tint.

Tint laws specify the minimum amount of light transmittance on vehicles’ windows. Specific provisions for New York’s tint laws may be found in Section 375 (12-a) of the Vehicle and Traffic consolidated laws. The window tint laws in New York state were last amended in 1991.

It's been a month since New York State began implementing the testing of window tint during a vehicle's annual state inspection.
Similiar tagsWindow Tinting
Home
Home